With sex toys, bondage beds and kinky dungeons, Netflix’s newest home makeover series is the anthesis to a wholesome episode of DIY SOS.

How To Build a Sex Room, which premiered on the streaming service last week, follows British designer Melanie Rose as she creates bespoke adults-only playgrounds for clients across the US.

The projects range from a sumptuous Las Vegas-themed suite for a married couple stuck in a sex drought to a pleasure basement for polyamorous ‘family’ of seven.

Melanie, who spent 15 years in traditional interior design before transitioning to pleasure rooms, is dubbed the ‘Mary Poppins of sex rooms’ by one delighted customer thanks to her crisp English accent, gentle nature and seemingly bottomless bag of sex toys that she whips out ahead of each renovation.

Her clients include entrepreneurs, bankers, teachers and police officers. ‘Maybe even your next door neighbour,’ she says teasingly. ‘They say you never know what goes on behind closed doors. But I do.’ 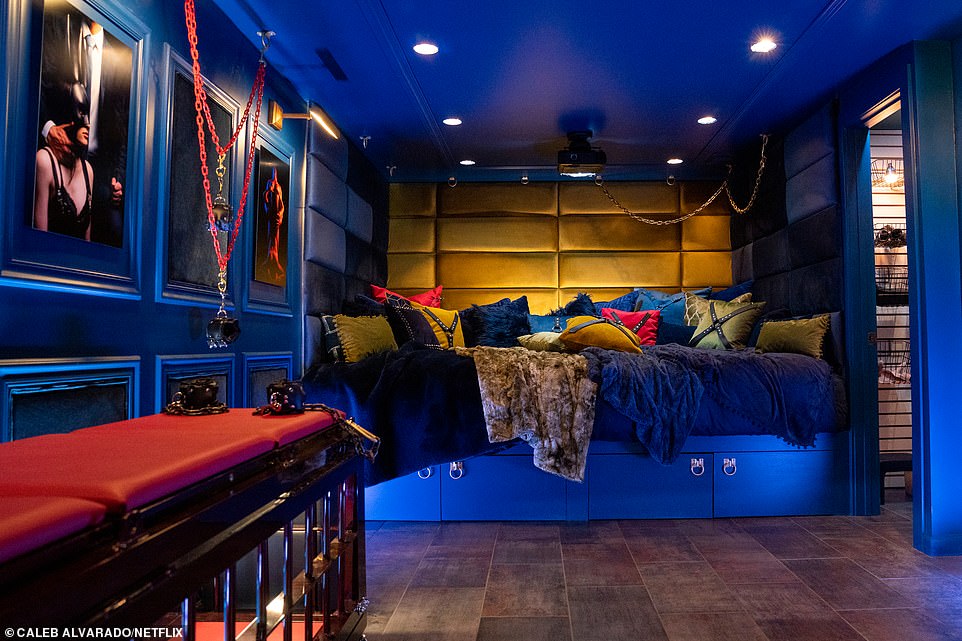 Home for a poly family: How To Build a Sex Room, which premiered on the streaming service last week, follows British designer Melanie Rose as she creates bespoke adults-only playgrounds for clients across the US. Pictured, Melanie had to create a space for a polyamorous ‘family’ of seven people with a bed big enough for them all to cuddle at the same time (pictured). She added bondage rope and a human cage (seen below the bench) 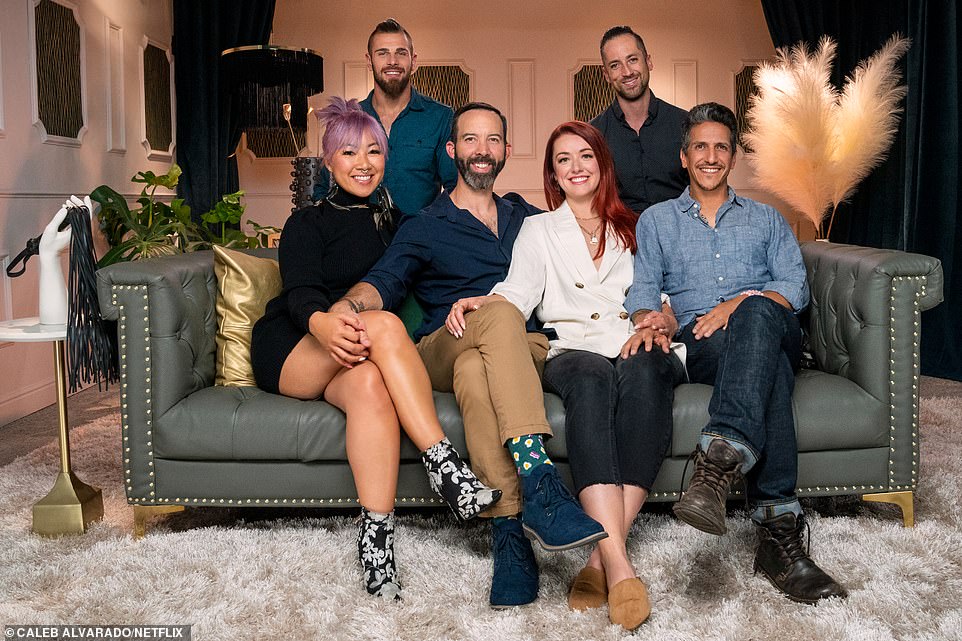 Polyamorous relationship (left to right): Soriya, Prince, Lester, Catherine, Nate and Arturo describe themselves as a polyamorous family. Melanie wanted to accommodate everyone’s needs and the desires in the new kinky dungeon 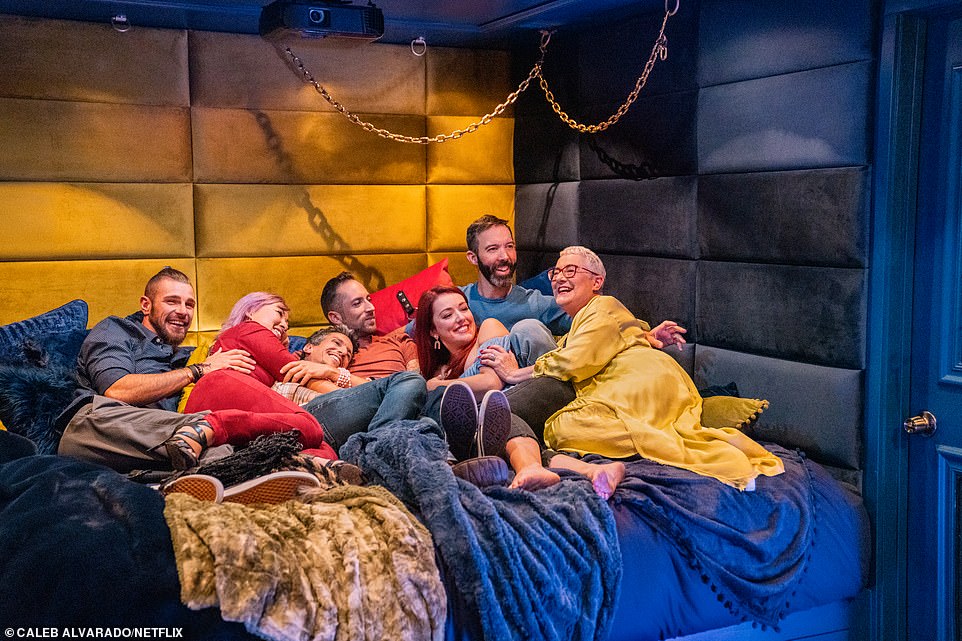 Room for everyone: The polyamorous family cuddle with Melanie Rose on a 9ft x 7ft bed that was specially designed to fit the entire group. Melanie also added a projector and drop down screen for the family movie nights 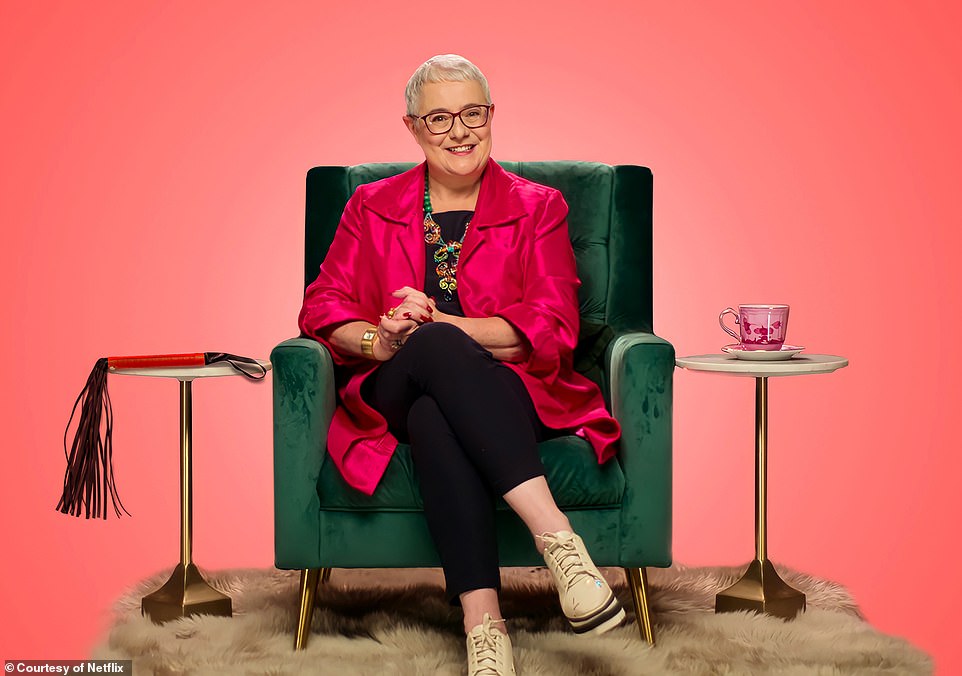 The Mary Poppins of sex rooms: Melanie, pictured, who spent 15 years in traditional interior design before transitioning to pleasure rooms, is dubbed the ‘Mary Poppins of sex rooms’ by one delighted customer thanks to her crisp English accent, gentle nature and seemingly bottomless bag of sex toys that she whips out ahead of each renovation

Born and raised in London, Melanie Rose spent over a decade as a TV and West End actress before relocating to Los Angeles where she became a sought-after interior designer.

‘For over 15 years, I’ve been designing high-end homes,’ she explains at the start of the eight-part Netflix series.

‘Luxury kitchens, opulent bathrooms… So when a client asked me if I had ever designed a sex room, I was shocked at first.

‘And then I thought, “Why not? Why wouldn’t I go and design a sex room?” I quickly found out that sex rooms are the most wonderful rooms to design.

‘For the last 10 years, I’ve focused my design business almost exclusively on these pleasure rooms.’

Arguably the most difficult build of the series is the sex dungeon Melanie builds for a polyamorous group of seven people. She visits Lester and his lover Soriya, who explain they have an open, fluid relationship with another woman and four other men. 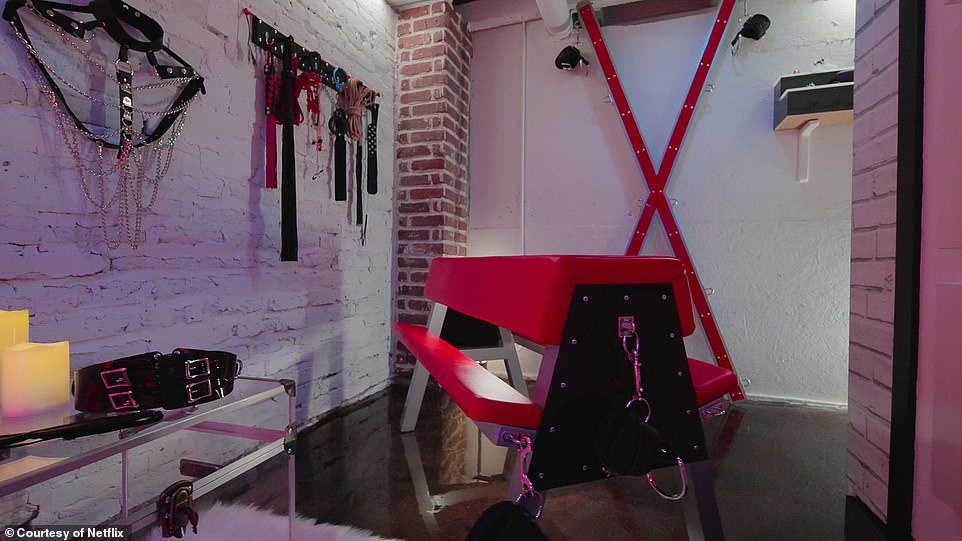 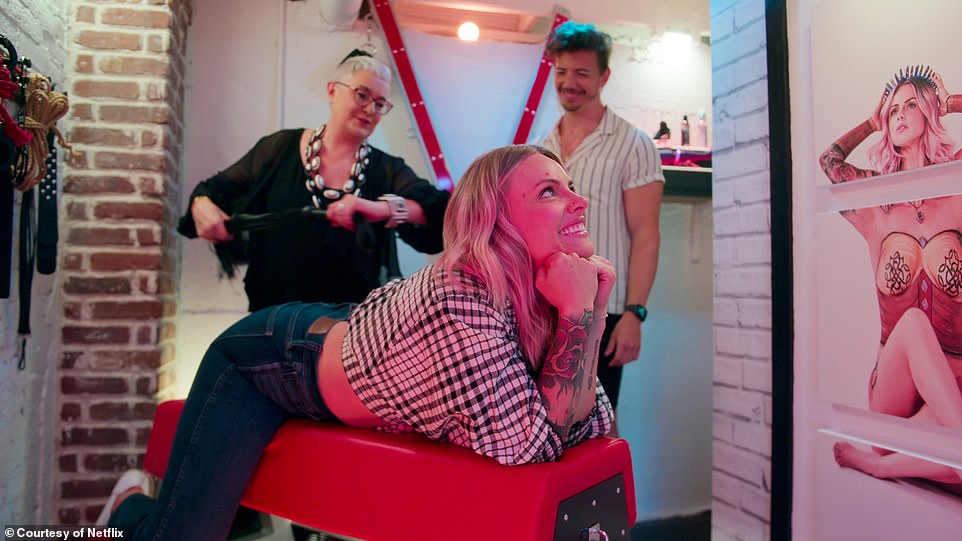 Ready to explore: Homeowner Taylor was delighted with the flogging bench and wasted no time in trying it out, saying ‘I am excited by the bench’. There is also the option to have someone tied up by cuffs at the front of the bench 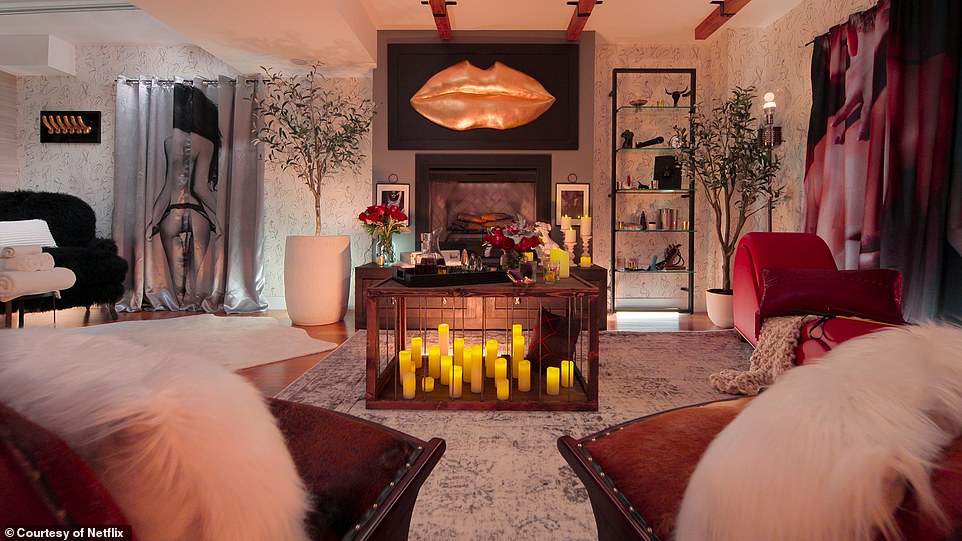 Parents’ playground: Hannah and Wesley wanted to reclaim some adult space after having a son together. Melanie created a sensual room in the couple’s basement, hidden behind a fake bookcase door. The designer added pieces of furniture like an inversion table to help the couple overcome issues created by their height difference 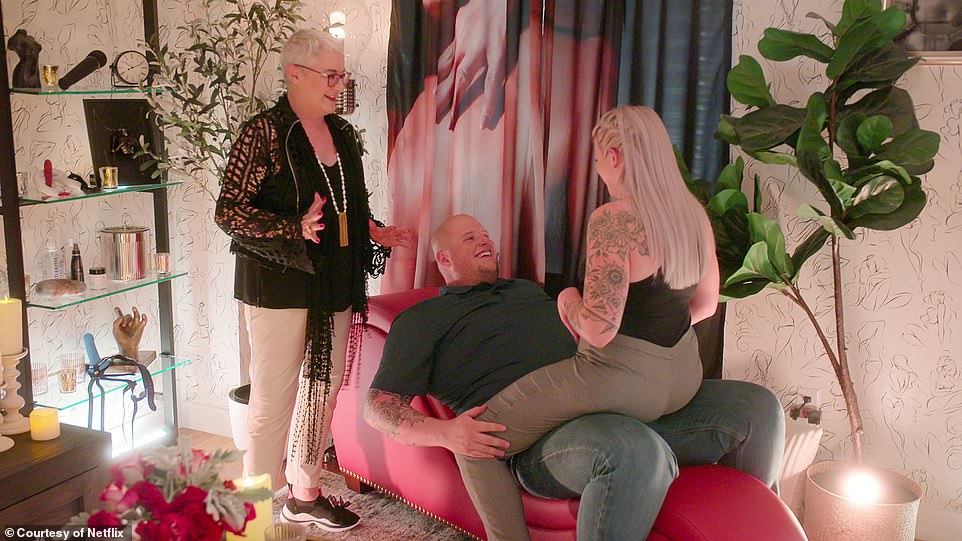 Reconnecting: The couple tried out the tantric couch in one corner of the room. Melanie also added a rope wall to help Hannah and Wesley learn how to tie each other up, and an extra large shower to help them realise their dream of shower sex

Soriya adds: ‘There is never any pressure for sex but it can happen at any given time.’

Before the makeover, the polyamorous family had to squeeze into a disjointed series of rooms in Lester’s basement but had dreams of a single space where they could ‘cuddle or be intimate’.

‘Les has a fantasy,’ Soriya tells Lester. ‘He wants all of us to have sex together in the same room.’ Meanwhile she has a desire for the entire family to have a shower en masse. ‘I have this idea of being able to wash all of my humans’. 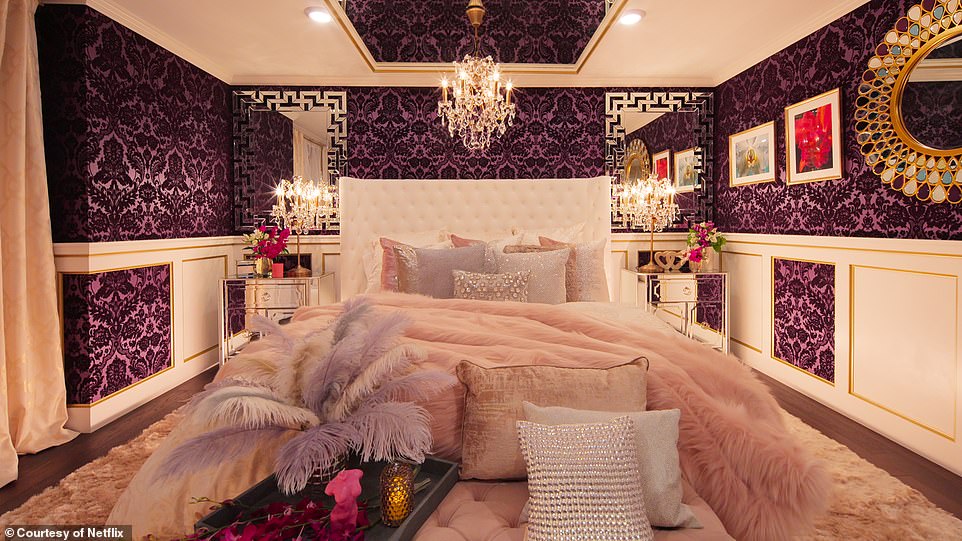 Sexy vegas suite: Married parents Shenika and Matthew transformed their bland bedroom into an adults-only oasis complete with fur covered beds, sumptuous textures and plenty of space to reconnect with each other on a physical level 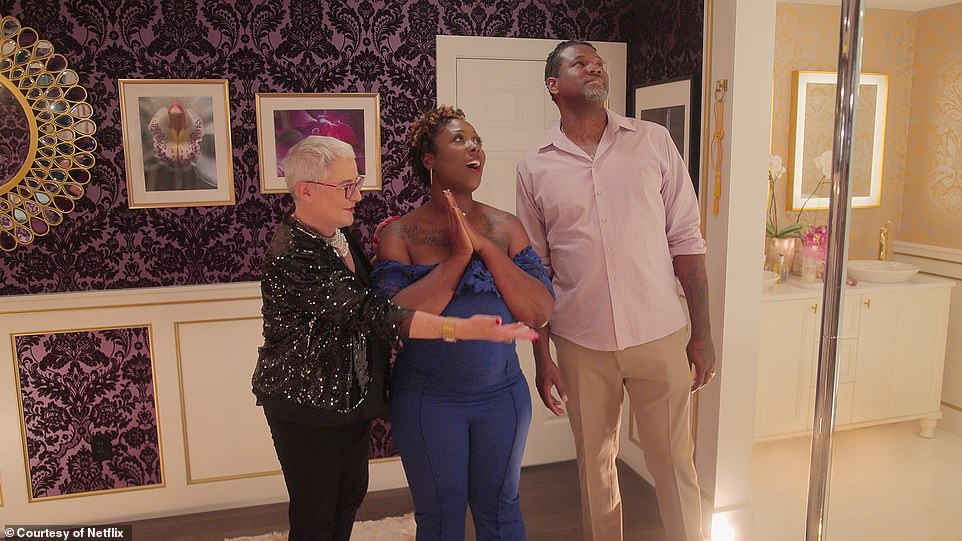 ‘We are never leaving this room’: Shenika loved the blinged out touches like the chandelier, the wall mirror and opulent bathroom. Melanie added a pole in the middle of the room (pictured) so Shenika can entertain her husband 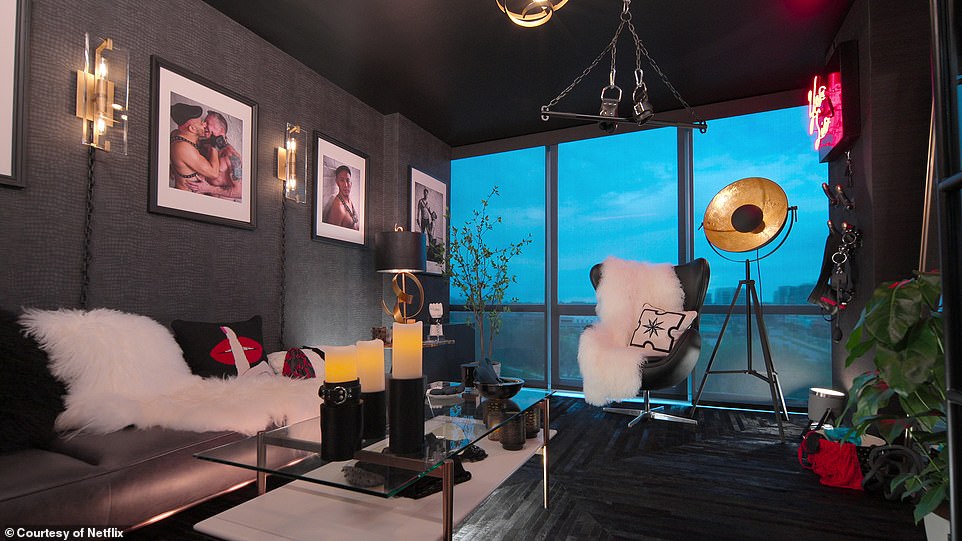 Polished masculinity: Melanie attached a restraint to the ceiling to allow them to couple to explore. She also integrated a webcam so the couple can connect to each other despite being in a long distance relationship 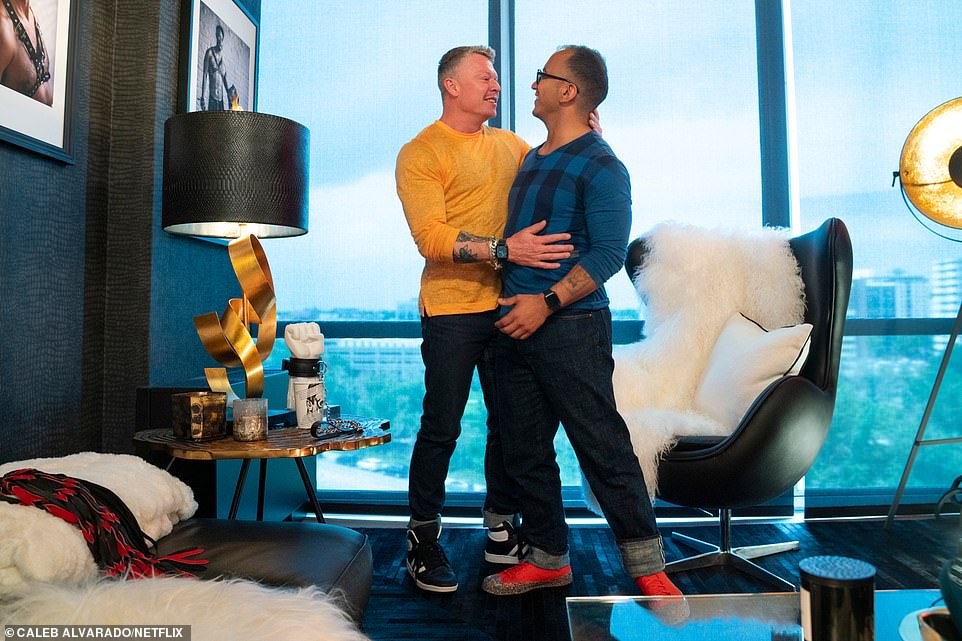 Thrilled: Matthew, left, and Orlando wanted a space where they could spend quality time together while in the same city. The couple posed in their own X-rated photoshoot and Melanie hung their finished photographs on the wall for extra stimulation 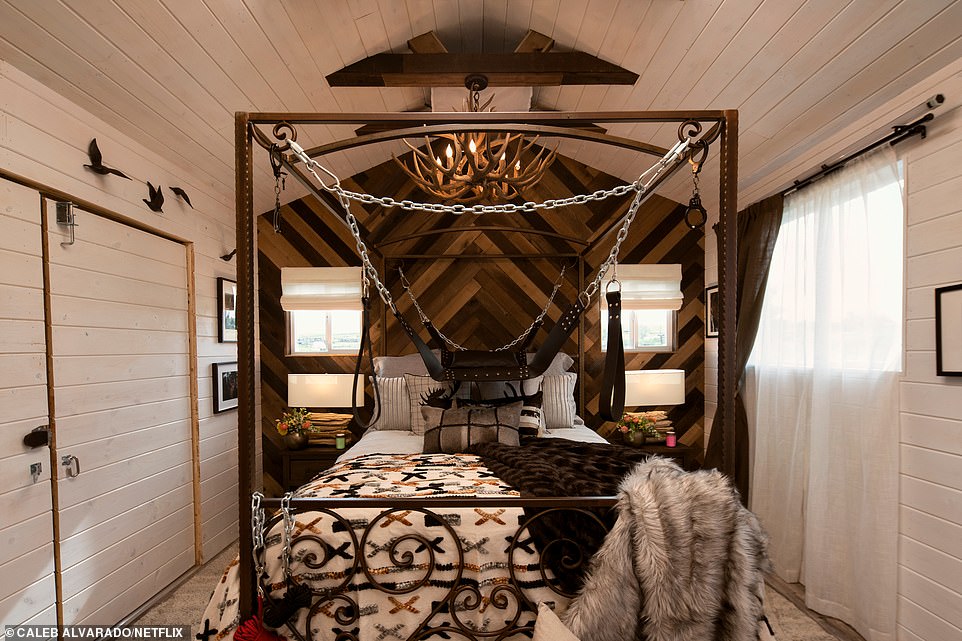 Sex shed: A bondage bed takes centre stage in Gary and Tricia’s kinky farmhouse. A sex swing is attached to the frame of the four-poster but can be removed if the couple want to experiment. The room is decorated with the couple’s saucy photos 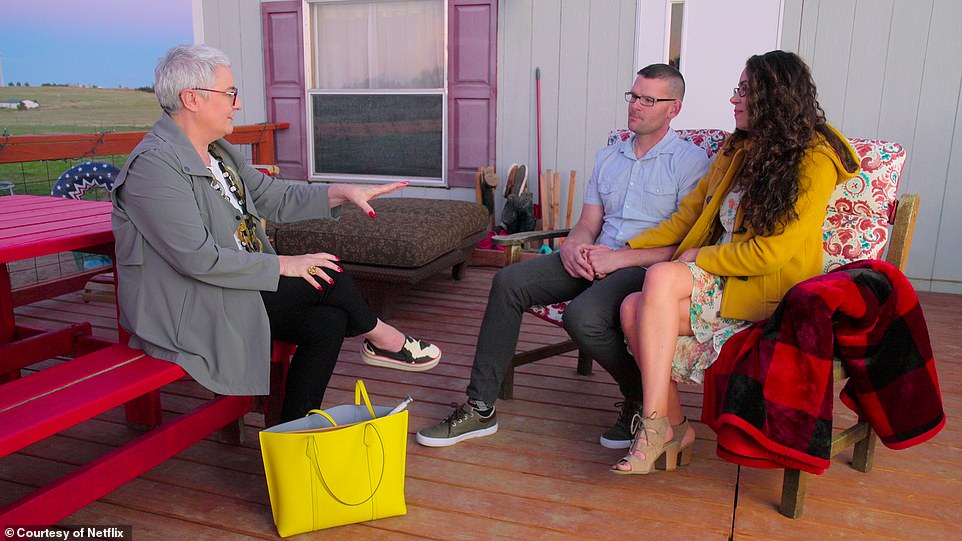 Frisky farmers: Gary and Tricia had originally wanted their bedroom to be transformed into a sex den but had to compromise due to the lack of space inside the house. Instead Melanie brought in a separate shed to be dedicated to a sex escape

Melanie is able to combine the rooms to create a single dark panelled space complete with sex toys and devices that meet a range of fantasies, from bondage to voyeurism. The centrepiece is a 9ft by 7ft bed that gives all seven people enough space for a ‘cuddle puddle’.

Elsewhere, Melanie visits Taylor and AJ, a sexually adventurous couple living in a quaint 19th century home who want to turn their basement into a ‘rock ‘n’ roll sex dungeon’.

As with all her clients, Melanie talks them through the different kinks and fantasies they might want to explore and brings them along to a workshop session to try out the X-rated activity.

Taylor and AJ try flogging, known to professionals as ‘impact play’, where various implements are used to whip, tickle and tantalise.

Melanie brings in a piece of apparatus known as a spanking bench to encourage greater exploration, much to the couple’s delight. 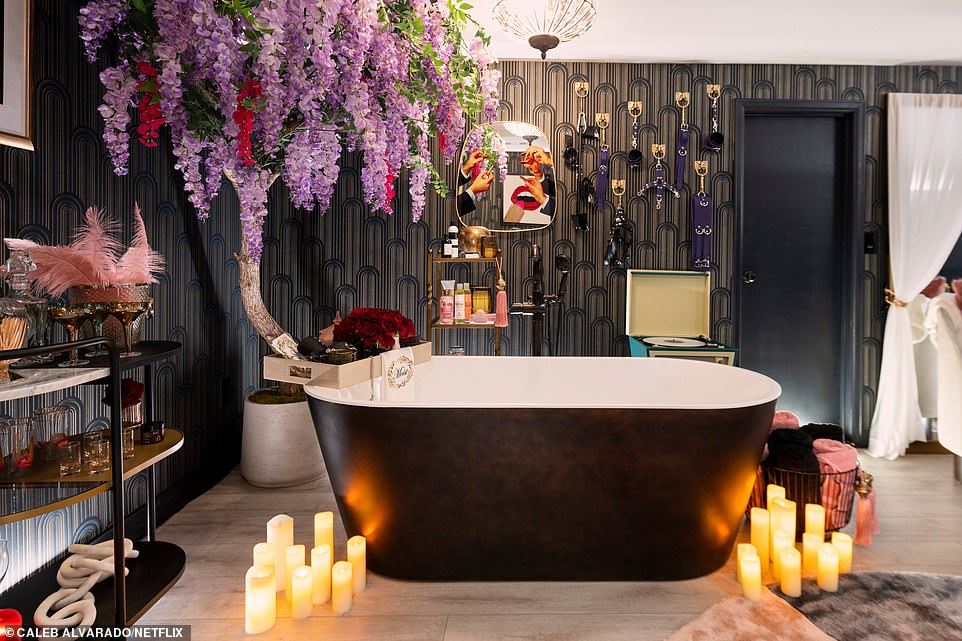 Backstage boudoir: Brody and Bettie’s basement was unrecognisable following the sexy, dangerous, Old Hollywood makeover. Melanie attached a suspension bar to the ceiling so the couple can tie each other up 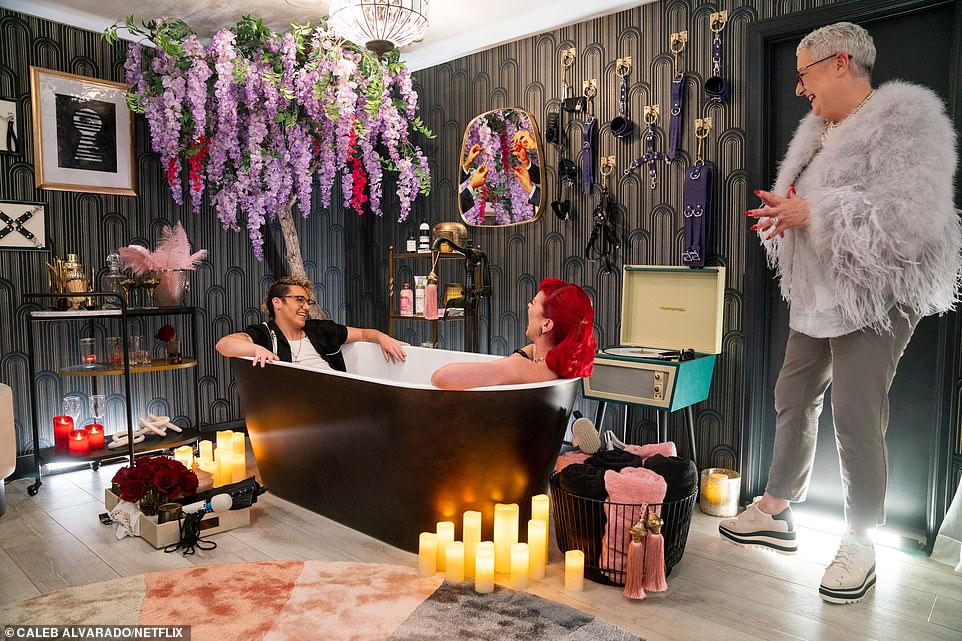 Time to unwind: Brody and Bettie were given their dream bathtub for two and space to watch each other apply their makeup. Melanie finished off the space with new sex toys, harnesses on the walls and a custom wardrobe 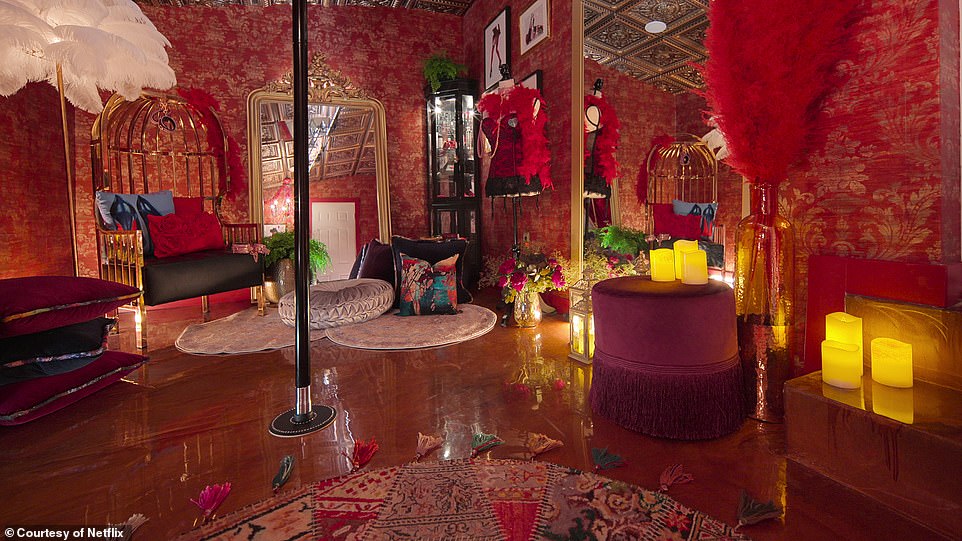 Mouline Rouge seduction: A birdcage throne, pole and full-length mirror encourage a sense of fun in the space for Ouima and Jesse. The married couple wanted to find the fun in their sex life 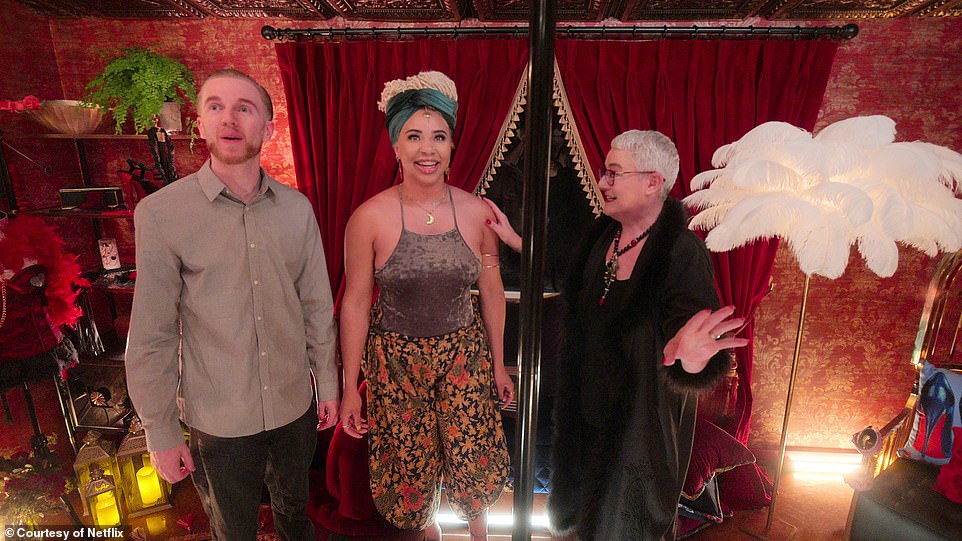 Private show: Melanie created a luxurious space for Ouima and Jesse, packed with sensory stimulation for them to enjoy

Several clients are parents who have lost the spark over years of marriage or since having children.

Hannah and Wesley tell how their home has been ‘taken over’ by their three-year-old son, leaving them without any privacy or space to have sex.

Their feelings are echoed by Matthew and Shenika who want to ‘bring that sexy back.’ Shenika explains: ‘We don’t have anything for us and it’s lacking in our marriage.’

Both couples are given their private spaces, tailored to their individual needs.

Other couples include Matthew and Orlando, who use X-rated videos to keep their long-distance relationship feeling fresh, and Brody and Bettie who want a backstage boudoir.

She adds: ‘The rooms I design are meant to transport you away from the daily, mundane ritual of life and into a world of fantasy, pleasure and connection, of your dreams and desires. And most of all, of being free.

‘But they’re not just about sex. They’re about strengthening relationships.’ 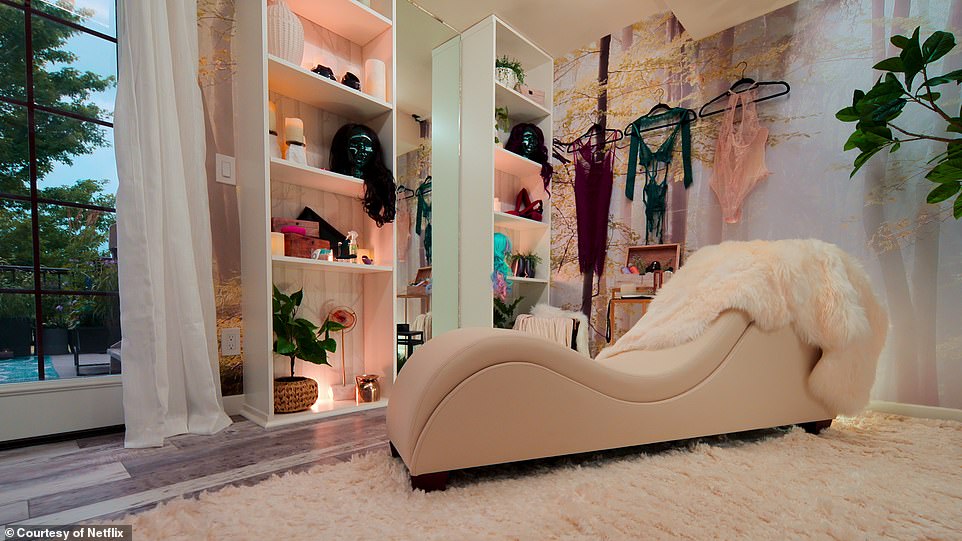 Spa-like escape: Meghan and Dave were not into overt kink so Melanie created a soft, sensual space for the couple with a few naughty touches. The tantric chaise, pictured, allows the couple to try out different sex positions than a traditional bed allows 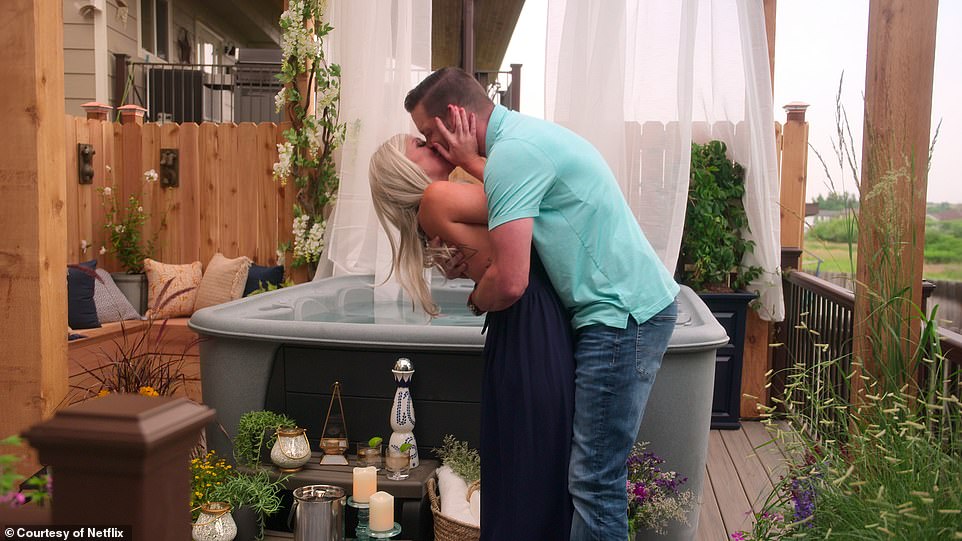 Private paradise: Melanie Rose added a supersized deck and bought Meghan and Dave a large hot tub so they can continue their sexual adventures outside. She added plenty of wildflowers to bring the feel of the meadow into the home 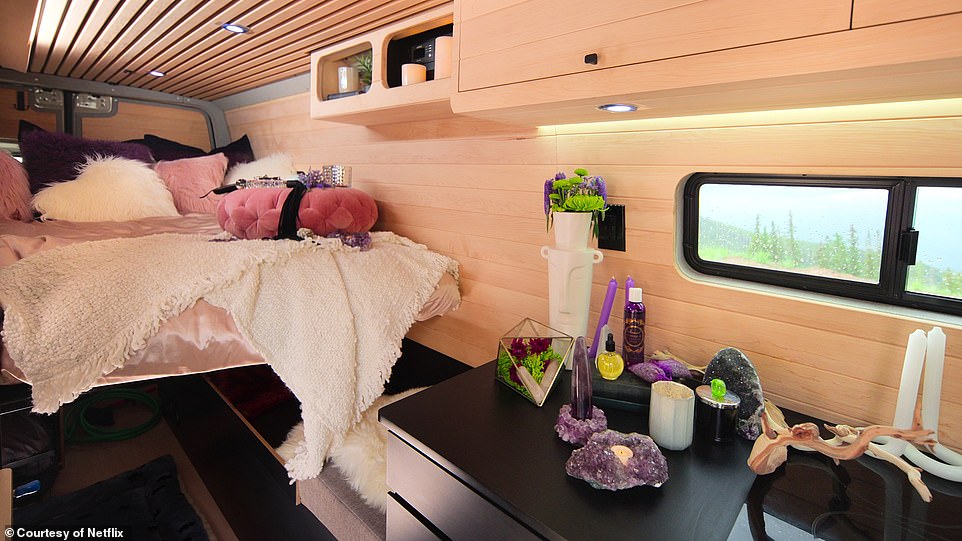 Compact but kinky: Melanie Rose gave the couple the option of an outdoor sex swing or a boudoir inside their campervan. She added a selection of sex toys, a queen sized mattress and satin sheets to foster a feeling of romance 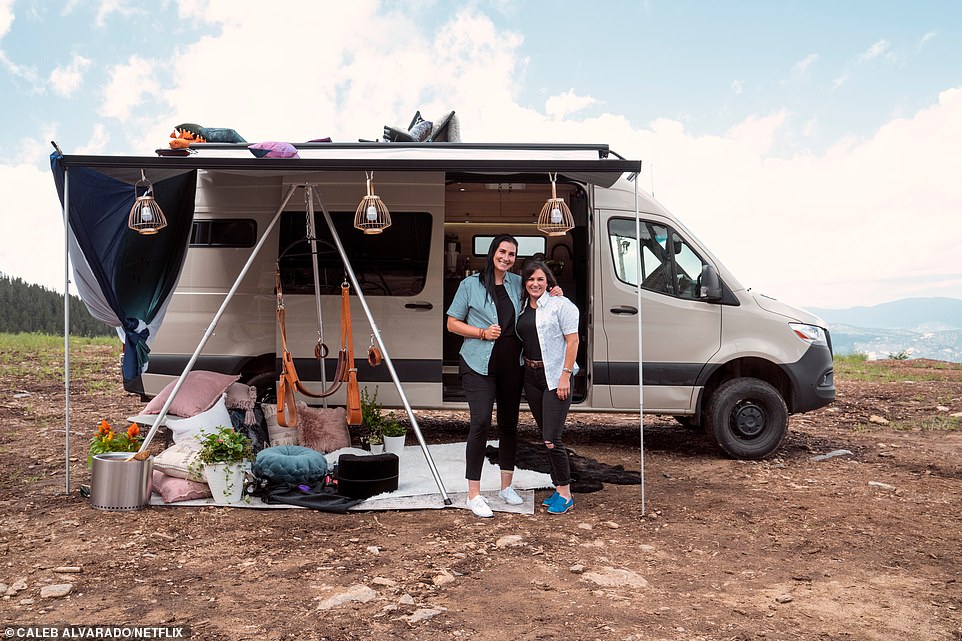 Nomad lifestyle: Sarah and Heather live in the back of a van but still wanted to find away to broaden their sexual horizons. They have been living on the road for a year and found that the lifestyle is taking its toll on their sexual relationship 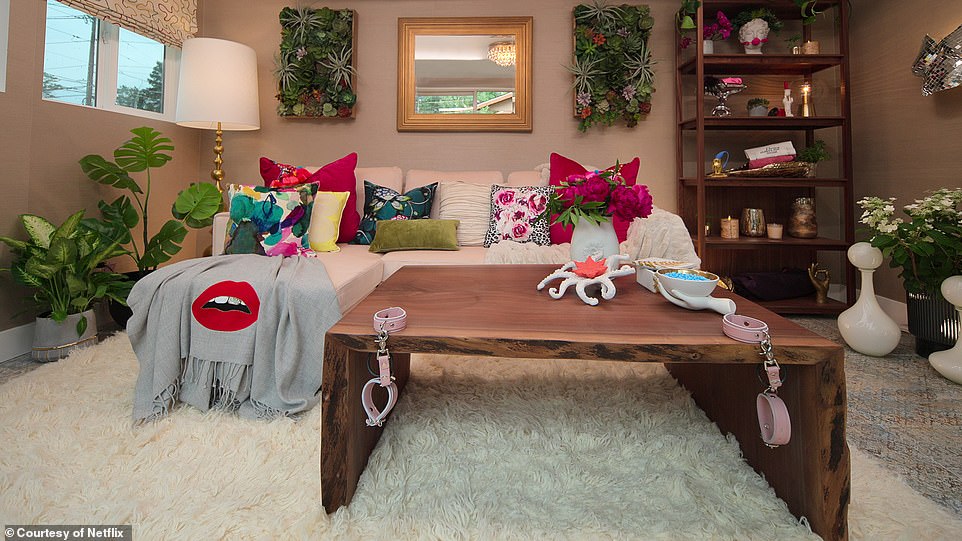 Soft touches: Lisa’s sex room has little touches like penises carved into the coffee table and brackets built in for handcuffs. The room also boasts a sex swing in the corner. It opens out to the private sex garden beyond 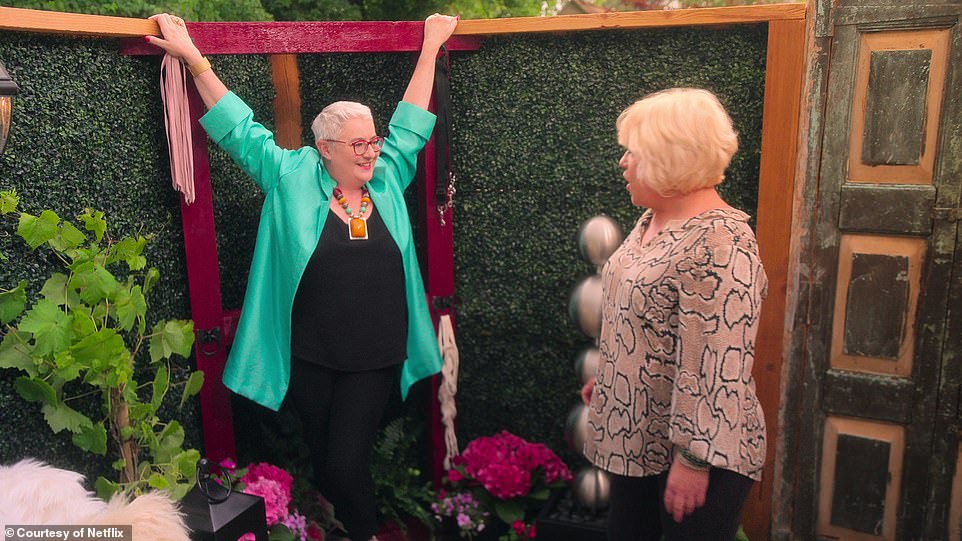 Secret sex garden: Melanie created a private outdoor space for Lisa, 52, right, who describes herself as ‘single as hell’. Melanie demonstrated how to use the sex wall where Lisa can be restrained